How to pet a Dog properly

Sumeet Rana
Sumeet Rana is a freelancer. Provide services like SEO content writing, website management for a one-time project or long - term project.
You can approach him on Upwork

I love petting my dogs, and I love it when I know my dogs want some petting. Sometimes, they’re so eager for affection that they shove their bodies against me, waiting for their pets. Not all dogs start out eagerly seeking affection, pets or otherwise. When I first adopted my German Shepherd Dog, River, she didn’t like if I tried to pet the top of her head, and it took a long time before she would let me hug her. (With Forest, I’ve had him since he was a puppy, so it was normal to be touched, hugged and petted.) It took a long time to build that with River, and it helped that I know how to pet a dog properly.

Wait — there it is again. How to pet a dog properly? Yes, there is a right and wrong way to pet a dog. Unfortunately, many of us just dive right into petting dogs we just met or don’t even know. Or, we fail to read our own dogs’ body language when they’re telling us “please stop.”

Dogs typically accept being petted by their owners, but strangers are a different story 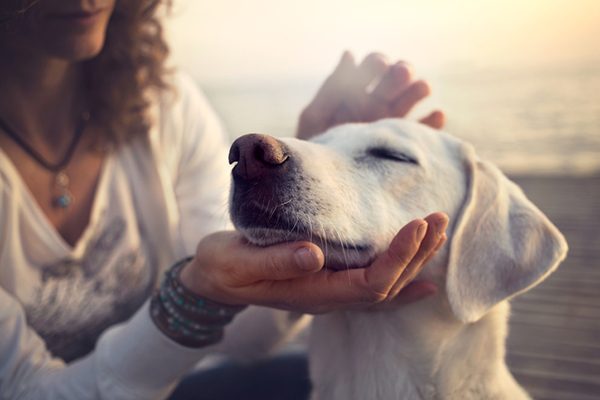 It’s instinct for humans to go right for the head when petting a dog — but most dogs actually don’t like it! Photography ©fcscafeine | Thinkstock.

Thankfully, dogs are pretty accepting of our pets and hugs … but won’t necessarily want the same affection from a stranger. “It’s just like us,” explains Susan Newell, owner and lead trainer of Animal Minds Behavior and Training in Rancho Cordova, California. “A friend giving you a hug is much different than a stranger coming up and giving you a hug.”

However, if you’re like me, sometimes you don’t want a hug, even from your friends. Your dog could be the same way. So how do you know if your dog wants some pets? Let him tell you. “If your dog is initiating the interaction, or licks your hand, that’s typically a good starting place to begin petting,” Newell says.

When it comes to another dog you don’t know, definitely don’t try to start petting him until he hints that he’s OK with it. And don’t offer him your hand to sniff — despite what a lot of us were taught, it’s not a good idea, Newell says.

“I can’t tell you how many dogs I run into that have learned to start biting hands because of that,” she says. Instead, she adds, “The best thing you can do is let a dog come up to you and you not do anything that’s not invited.”

Your body language matters when petting a dog

You also need to watch your body’s position and language, Newell says. Specifically, we shouldn’t hover over dogs, as they might perceive it as a threat. We also need to watch the amount of eye contact we make while petting dogs. While it’s natural for us to want to lovingly stare into a dog’s eyes, a dog might not interpret it the same way. “It’d be like if someone came up to you, shook your hand and stared at you,” Newell says. “You’d be creeped out.”

The general rule of thumb is not to make too much eye contact, specifically any hard stares, when you meet a dog you don’t know. Just glancing at a dog, or keeping your eyes averted are best practices when petting dogs you don’t know. 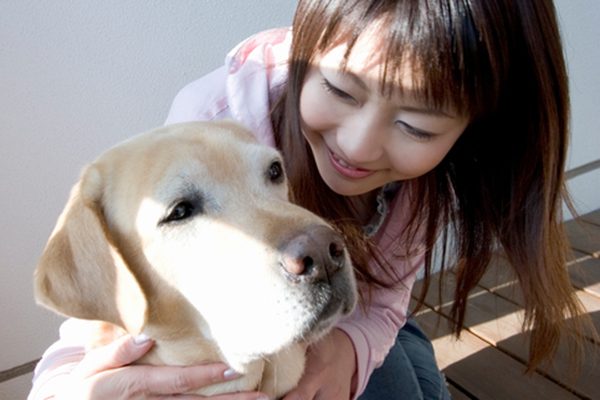 Should you hug dogs, and how should you do it? Photography ©DAJ | Thinkstock.

A lot of dogs don’t like hugs. It depends on the individual dog, but to be safe, don’t hug a dog you don’t know. Your own dog might learn to tolerate hugs or even like them. However, it’s best to not let a stranger hug him or for you to hug any dogs you just met.

Where should you pet a dog?

There are specific areas dogs that dogs usually don’t like to to be pet: Their legs, paws, muzzles, tails and ears. (But behind their ears they tend to love). Another place dogs don’t like being touched? Their heads. Ironically, it’s almost instinctual for us to go right for the head. And while many dogs learn to tolerate it, why do it? There are plenty of better places to pet dogs that they seem to universally love.

Instead of the head, pet your dog under his chin or stroke his neck. Come in from the sides to scratch behind his ears, or wait until he rolls over so you can rub his belly. A dog who’s really into petting will often start moving his leg like he’s trying to scratch himself. The back of the neck, and the rump also seem to be popular spots for petting.

Training your dog to be pet by strangers

It’s not a bad idea to teach your dog to tolerate being touched and petted in places he doesn’t like — both by you and a stranger. The American Kennel Club’s Canine Good Citizen exam specifically states that a well-trained dog should permit being petted by a stranger, as well as having his ears and legs examined.

The best way to do that is to ease your dog into it. I play with my dogs’ paws and ears here and there so they learn to tolerate it. I also taught them to let me hold their muzzles and examine their teeth and eyes, much like a veterinarian or groomer might.

While teaching them these things, I liberally rewarded them with treats so they learned to associate uncomfortable actions with their favorite foods. I did the same thing with strangers — my dogs learned that treats are close at hand when they accept a pet on the head from a stranger.

It’s good practice to teach your dog to tolerate petting he might not like. That’s especially true when  you run into that person who swoops in and pets your dog without asking you, let alone establishing any kind of permission with your dog. It’s in those moments that you’ll be glad you taught your dog to put up with people.

That being said, you need to read your dog’s body language so you know if he doesn’t like something or when he’s had enough. This is especially important around other people: You don’t want to push your dog so far that he reacts negatively, Newell says. “Not every dog knows to take himself away when he’s done,” she explains. “You need to take him away from a situation. Most of the time, I’ll back up and encourage the dog to come with me.”

Backing up is key, because it not only gets your dog away from a person, it doesn’t bring him closer to a person like it would if you walked forward. This move is good for another reason: You don’t have to rely on a stranger to stop what they’re doing. Most people will become offended or ask why if you request that they stop petting your dog. Instead, just move backward and bring your dog with you.

What are the signs that a dog doesn’t like being petted?

“Body stiffness is huge,” Newells says. “If your dog holds his breath or his whole body goes stiff, that’s your first clue that it’s time to stop. If your dog’s ears go down, or his tail tucks under him, [these] are other important signs.”

Tell us: Where does your dog like to be pet? Where does he hate getting petted? What advice do you have for others on how to pet a dog?